Okay, last time I posted it was green chile time…but hectic months stopped me from getting up a couple of ideas…but they will go up!

Today I awoke to our first snow of the season….several weeks early, by my reckoning…and quite a bit more dramatic than usual. It started yesterday afternoon with a nasty, cold rain and overnight it shifted over to snow.

The big deal here is not just getting snow on the ground (although it was already gone from the streets and sidwalks by the time I woke up!).  For me, it is watching the stormy weather clear and getting a clear view of the Organ Mountains and the snow on them!

So, here’s how it unfolded over the last 24 hours:

As you can see, Slick wasn’t particularly interested in getting up this morning! In fact, all the dogs were not going out yesterday and it was a cliffhanger for a couple of them in terms of how long their bladders would hold out. Even Slick rebelled at the cold rain late in the afternoon, although I got him out for about 2 seconds to pee pee.  Toro went out into the backyard, but Tico stayed put in the back of his crate all day until I threw him outside after things cleared today!  He is deathly afraid of storms…we adopted him from the animal shelter in February 2002. He had spent a month with people who had found him in a ditch. He was about 6 months old when we got him, so I figure he was out in some pretty cold, rotten weather as a baby.  So, I can understand his penchant for hiding under the bed, in his crate, and generally refusing to go out at all.

Slick Lingers in (My) Bed

I don’t blame him, because this was going on outside: 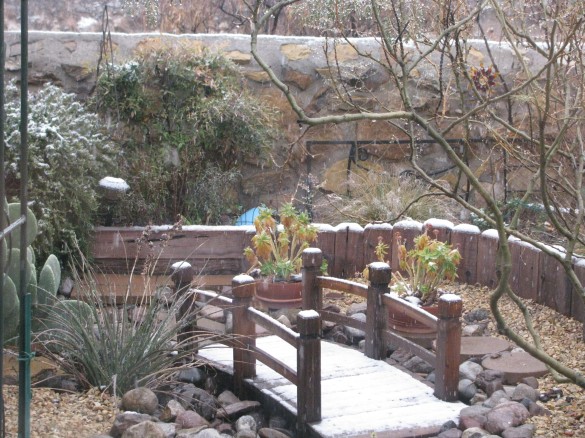 It was still snowing in fits and starts...

Not Even the Birds Were Out for Their Morning Meal...

Pretty icky for these parts, but sissy weather for back in New Jersey!  But, it’s so fleeting here, that this sort of raw, cold, dreary sort of weather is a shock!

Ah, but then it began to clear…the clouds started rolling away and sun came…and finally, I went out to the back…and…

The Organs Show Off Their Winter Coat...

…At least here there’s a magnificent payoff at the end of the nasty weather!

Check out my new blog...